Skip to content
Watch highlights as Cardiff Rugby beat Connacht on the opening night of the United Rugby Championship at the Arms Park.
Wales head coach Wayne Pivac faces a fly-half injury conundrum ahead of the New Zealand game on 30 October after injuries to Cardiff fly-halves Rhys Priestland and Jarrod Evans.

Old Belvedere showed exactly why they are one of the leading clubs in the country as they opened the Energia Women’s All-Ireland League with a 63-0 bonus point win.

Debuting at this level, the young Wicklow history makers were valiant opponents, particularly early on at Ashtown Lane where they were backed by a vocal home crowd.

However, Belvedere’s class duly told as they racked up 11 tries – including braces from Hannah Tyrrell, Ailbhe Dowling and Vic O’Mahony.

The #EnergiaAIL action continues tomorrow with games in Ballincollig, Blackrock, Belfast and Limerick. Check out the match previews here.

A closely-fought first half, at the end of which Glasgow led 15-14, gave way to a purple patch for Ulster as quick-fire tries from Martin Moore and Nick Timoney had them in the box seat.

Ireland Under-20 starlet Nathan Doak, who had replaced hamstring victim John Cooney, put his name to the bonus point score.

However, Ulster lost James Hume to the sin-bin and were left hanging on during the closing quarter as the new-look Warriors battled their way to a brace of bonus points. 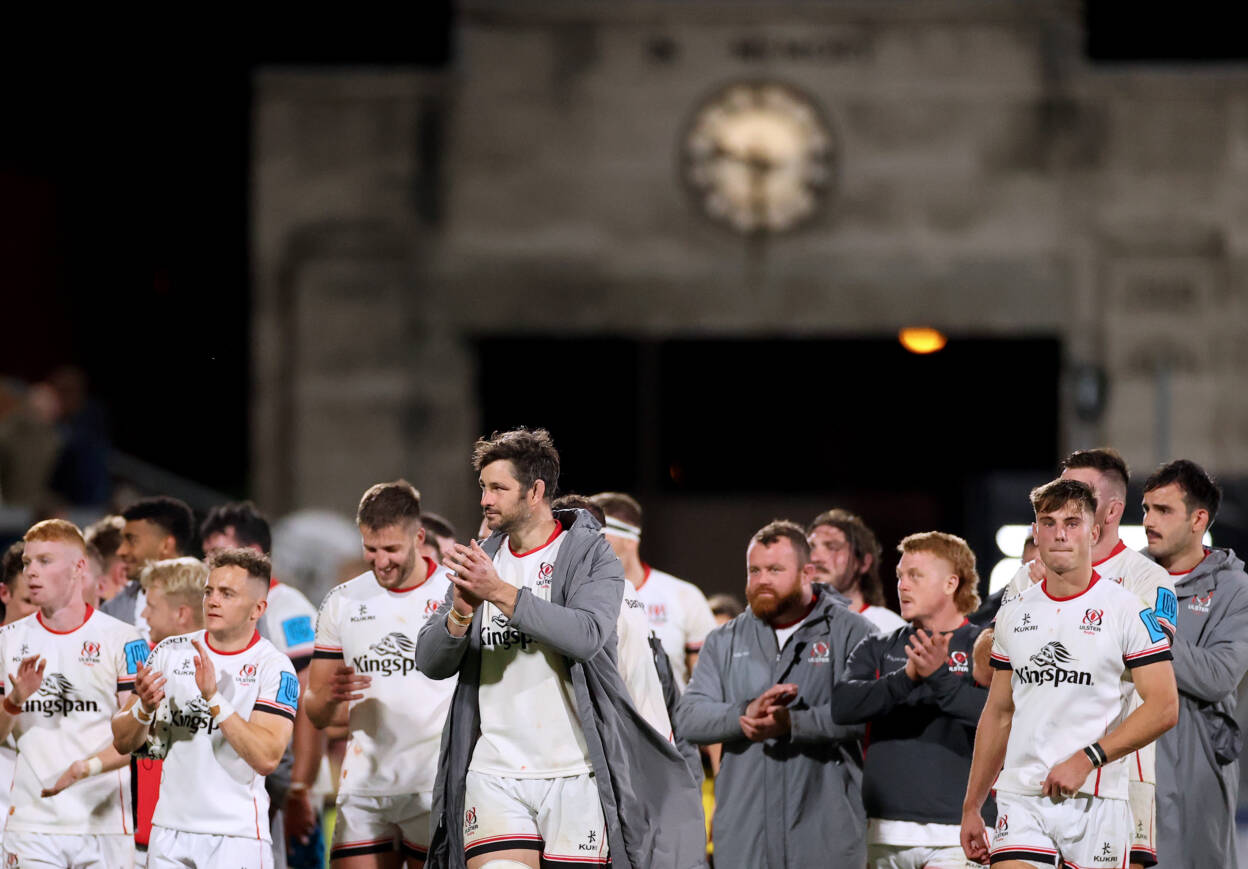 Dan McFarland’s men began with a bang in the opening exchanges, Stuart McCloskey making a break and offloading to Robert Baloucoune who raced down the wing but was tackled just short of the line.

Ulster won a penalty and looked to make use of their maul from the lineout. They changed tack and moved the ball wide, with Glasgow’s Cole Forbes guilty of a deliberate knock-on as Cooney looked to convert an overlap out wide.

Referee Ben Whitehouse produced his yellow card and awarded the penalty try. Three minutes in and the 15,000-strong home crowd were loving it.

The Warriors gradually gained some territory with a spell in the middle of the field. Centre Sione Tuipulotu went on a strong run down the short side to offload to George Horne to score. Duncan Weir was unable to convert. 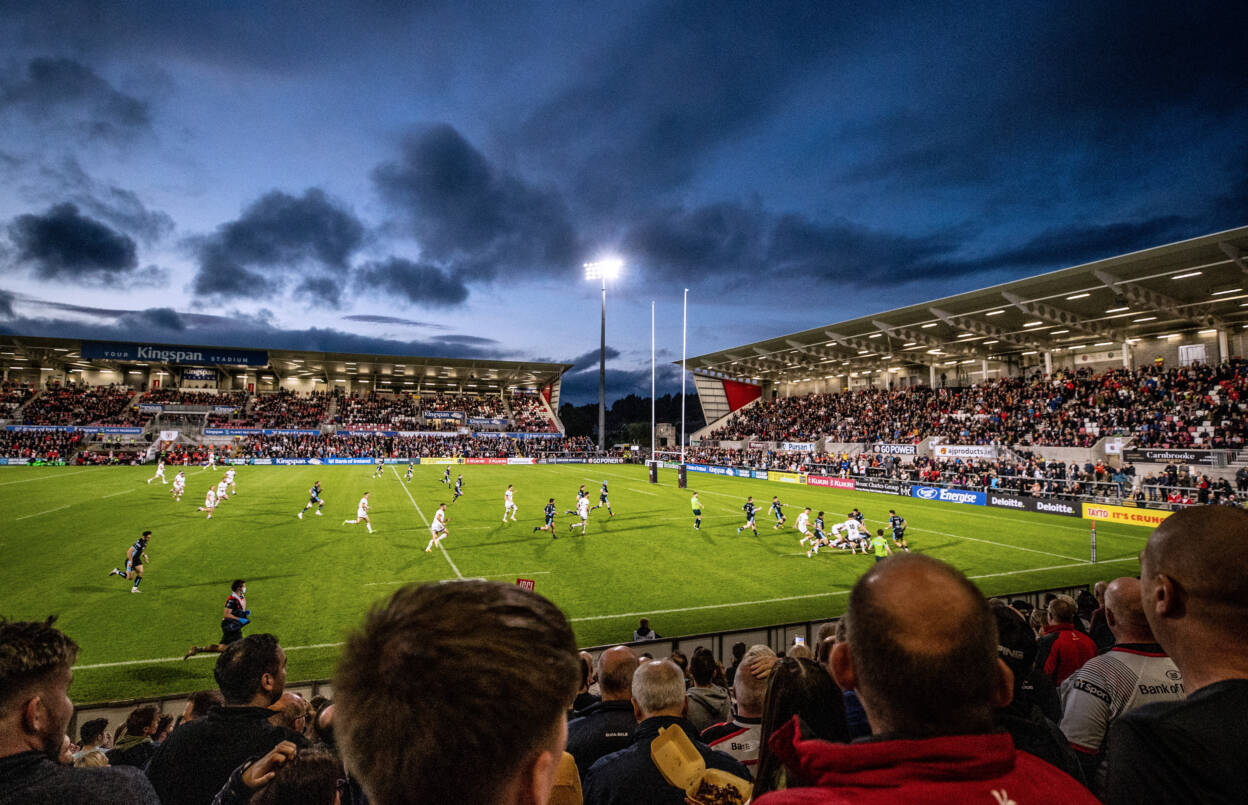 Ulster’s second try came through a trademark maul after a period of building territory. On his first competitive start, Brad Roberts peeled away to barge over and Cooney slotted the extras.

The visitors quickly earned a penalty, with out-half Weir on target this time as the province’s lead was reduced to 14-8.

Glasgow continued to grow into the game, testing the home defence which remained unbroken until the clock went deep into the red. Johnny Matthews eventually muscled through to score, with Ross Thompson’s conversion nudging the Scots in front.

When the second half got underway, Ulster made a real statement of intent by applying waves of pressure from the get-go. They went on the pick-and-go and prop Moore did really well to dodge a defender and twist around and score. 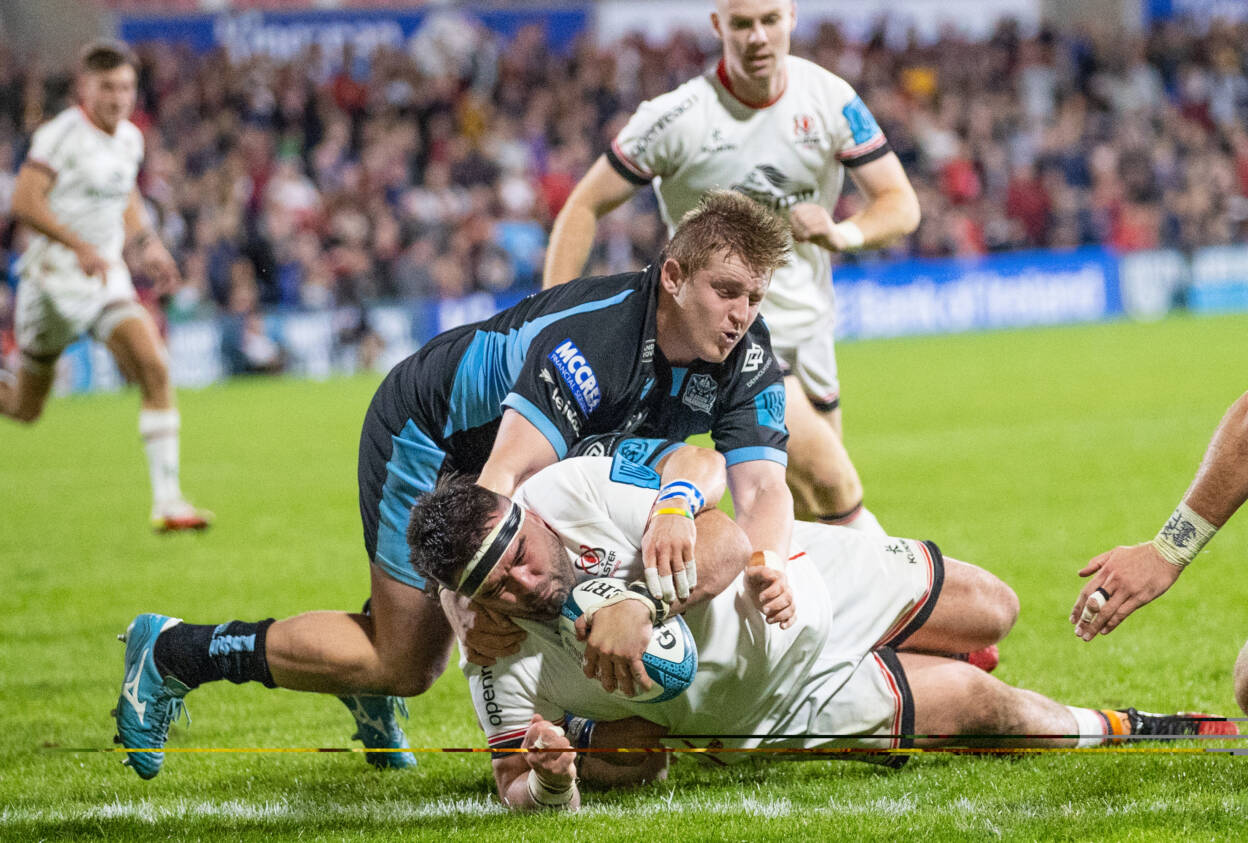 Talented teenager Doak, who came on to replace the injured Cooney, took over the place-kicking duties and landed the conversion.

Just five minutes later, Ulster pounced again. Billy Burns showed great vision to chip the ball over for Jacob Stockdale to make the tip-on to Timoney, who raced over for the bonus point try – converted by Doak. 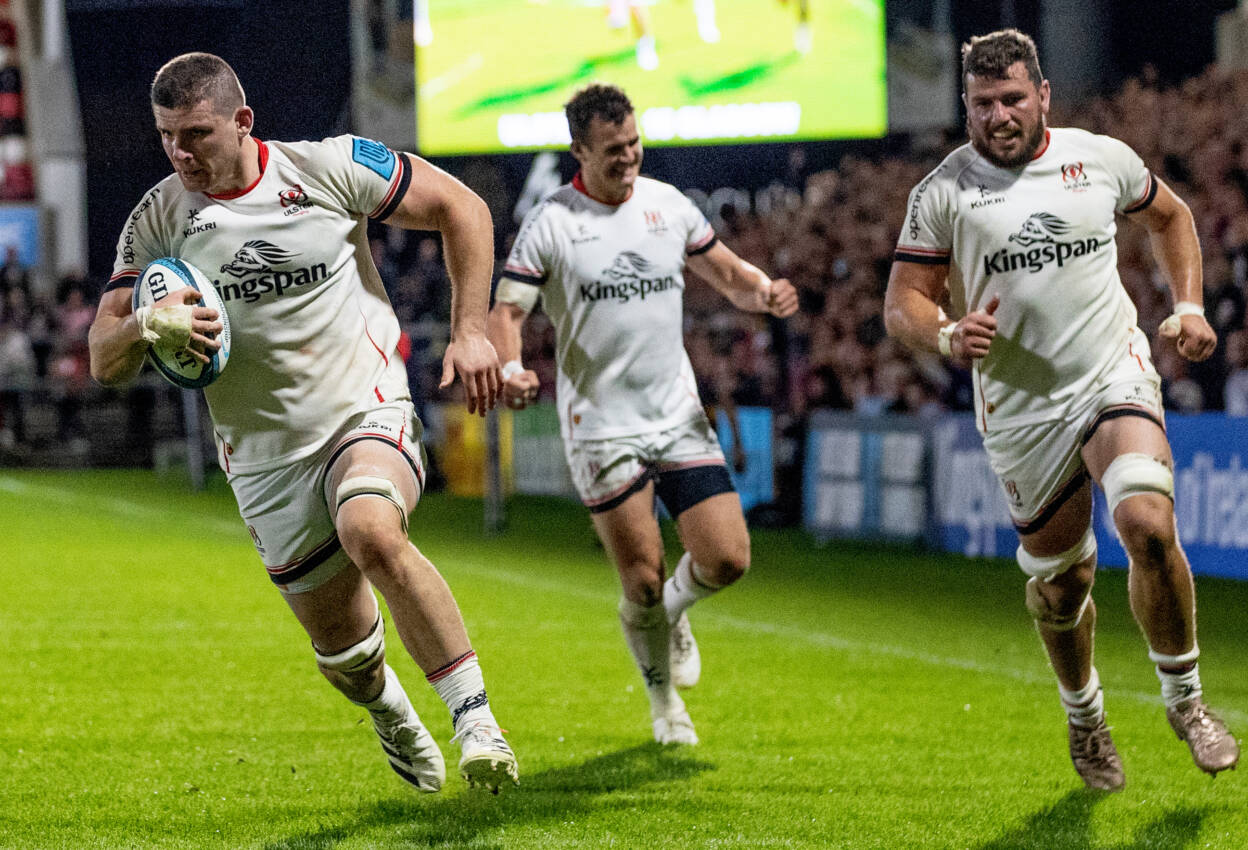 With Glasgow needing a timely lift at 28-15 down, Rufus McLean looked certain to score until Stockdale and Hume intervened with last-gasp tackles.

However, following a lengthy TMO review, the referee deemed Hume’s tackle to be illegal – he dived on McLean while he was still on the ground and going for the line. A yellow and a penalty try followed.

Ulster dealt with the young centre’s absence well, fellow Ireland international Will Addison coming on and getting involved in the build-up to the hosts’ fifth score.

He charged down a Glasgow kick, then sent a grubber through and did really well to reclaim possession. He was brought down just shy of the line, but had Doak on his shoulder to finish off. 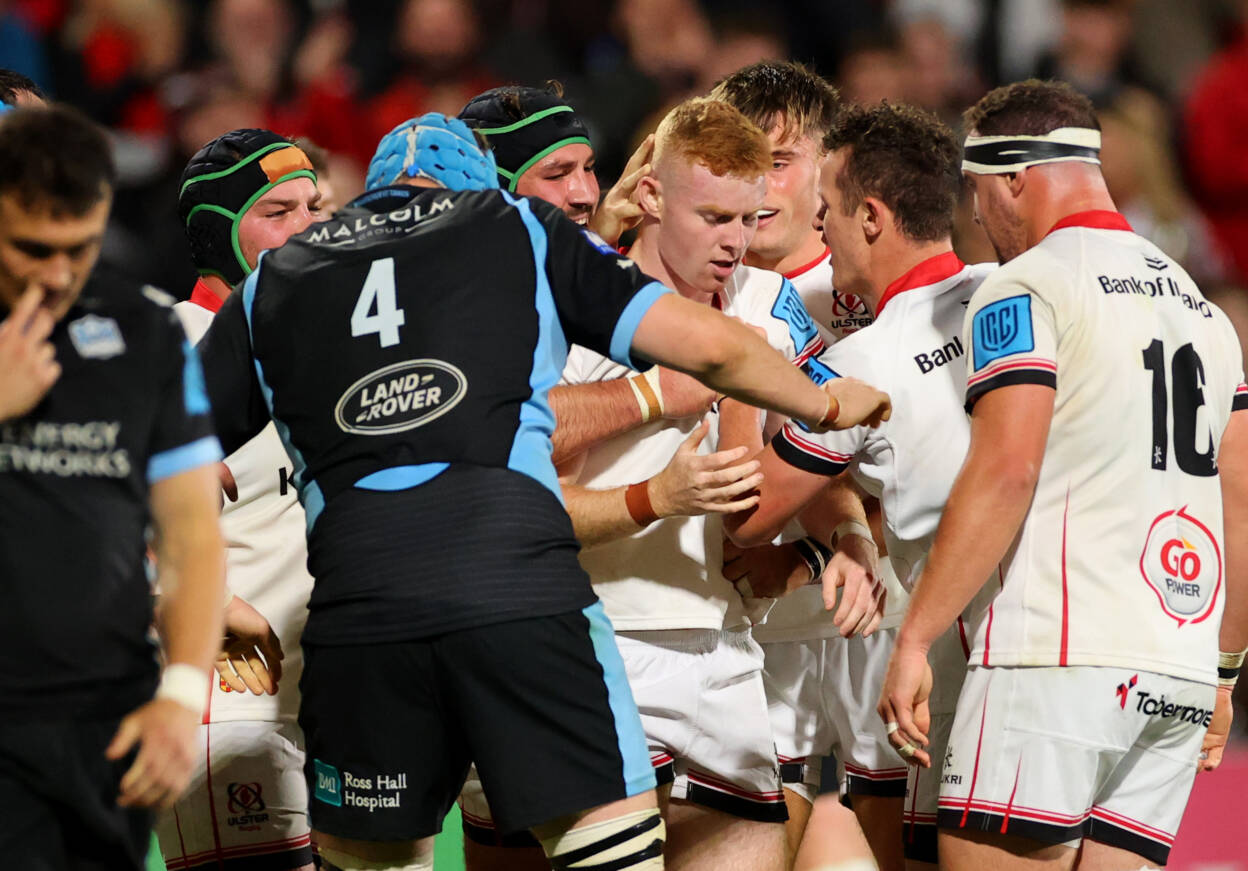 The scrum half converted his first senior try to leave it 35-22. Back came the visitors, Jamie Dobie collecting Ross Thompson’s offload to touch down in the 64th minute.

The conversion made it a six-point game, Danny Wilson’s charges continued to apply a barrage of pressure on the Ulstermen, but the latter’s superb defence stood firm for the final few minutes.

Trailing 21-16 past the hour mark, the visitors’ challenge fell apart after Jack Carty and Mack Hansen were sin-binned in quick succession.

Connacht had led twice through Carty’s boot and a smartly-finished 12th-minute try from Marmion, but converted efforts from Hallam Amos and Willis Halaholo put Cardiff 14-13 in front at the interval.

With both Cardiff out-halves forced off through injury, replacement scrum half Tomos Williams came on and had a crucial impact.

The Wales international provided two assists and kicked three conversions, as well as knitting together some of Cardiff’s best attacks with his inviting passes.

A Carty penalty lessened the blow of a Lane touchdown, but Dai Young’s men developed a match-winning cushion during the final quarter. 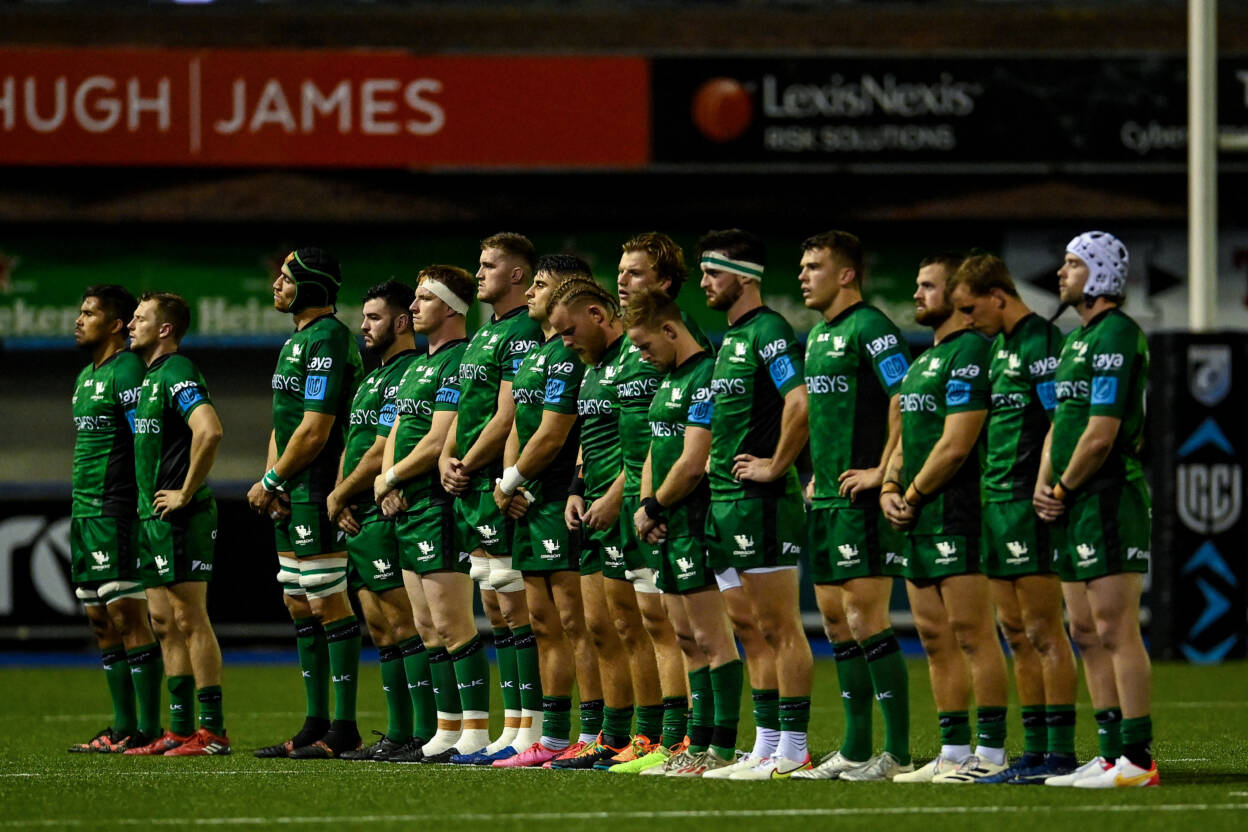 Rhys Priestland’s competitive debut for Cardiff was cruelly cut short by an accidental collision with Finlay Bealham. The prop won a subsequent scrum penalty, allowing Carty to kick Connacht ahead in the third minute.

Cardiff’s quick hands caused problems for the visitors out wide, though. After John Porch conceded a five-metre scrum, centre Halaholo carried well before a long pass put Amos over for replacement Jarrod Evans to convert.

The early scores kept coming, a Jarrad Butler turnover leading to a sharp break by Conor Oliver who fed the supporting Marmion to go in behind the posts. Carty’s conversion made it 10-7 after 14 minutes. 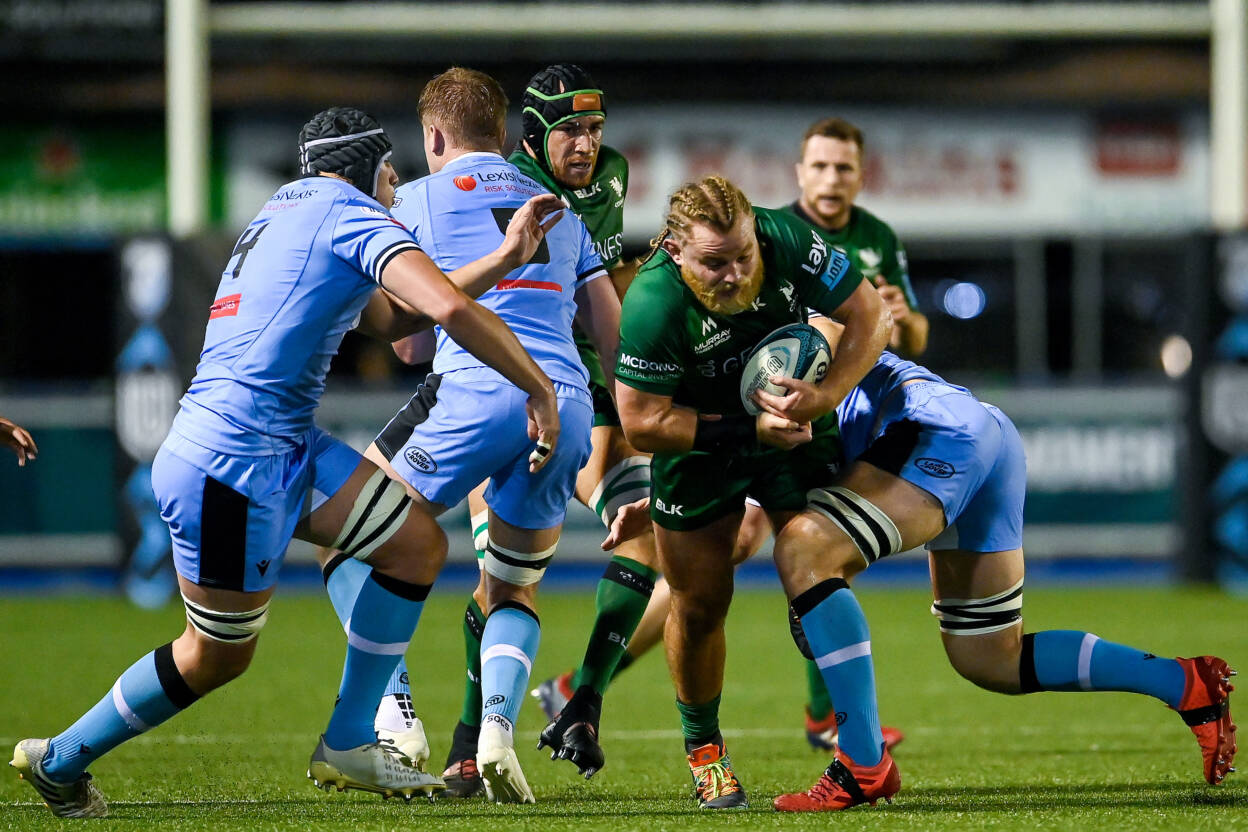 Midway through the first half, Cardiff suffered a further setback when Evans injured himself when contesting a high ball with Porch. Tomos Williams came on with Lloyd Williams switching to out-half.

The penalty count rose against Connacht and a lost lineout almost led to a Cardiff try. Josh Turnbull and Tomos Williams inspired a smart break, but the visitors’ defence held firm out wide.

However, Cardiff hit back on the stroke of half-time. The rampaging Porch was called back for a forward pass from Carty, and Tomos Williams sniped from the scrum to brilliantly play in Halaholo. Williams tagged on the conversion.

Porch threatened a breakaway score early on the resumption, with Halaholo doing really well to haul him down and win the turnover. 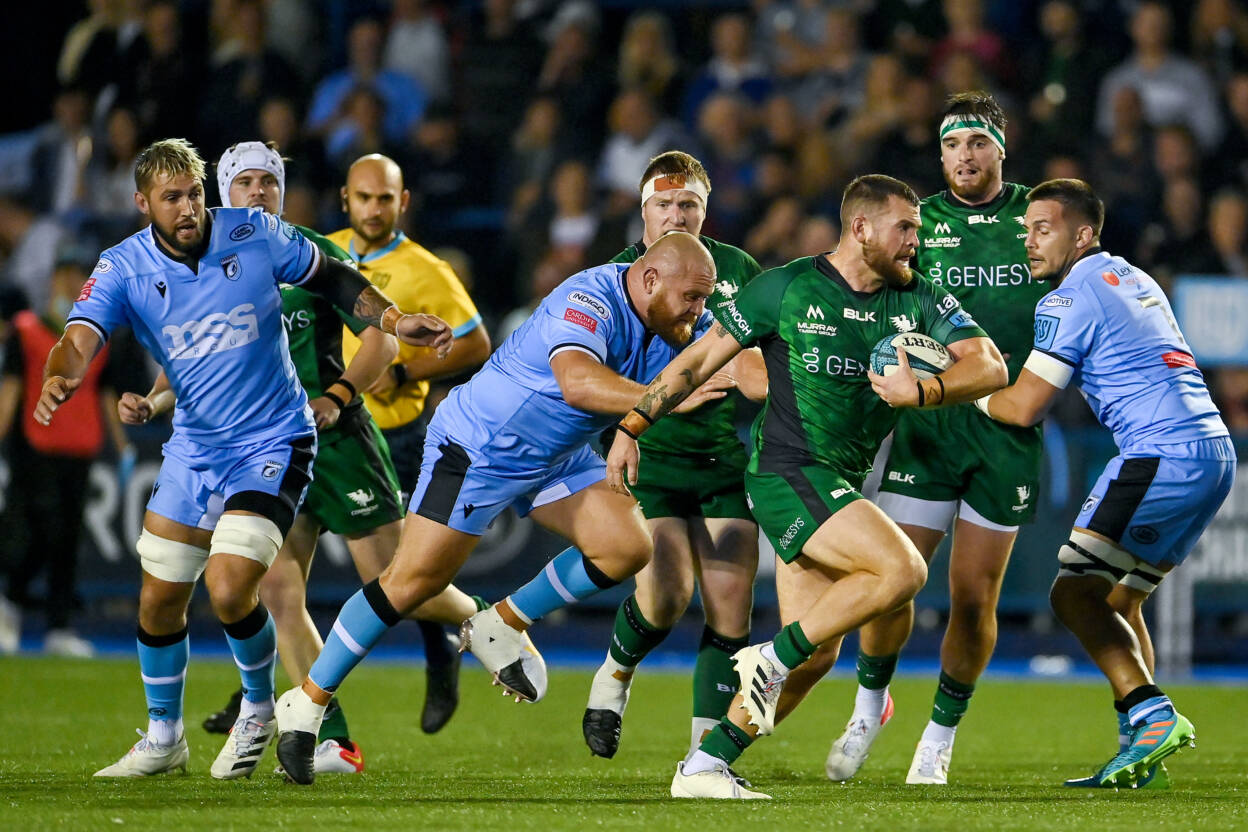 Connacht’s defence was worn down decisively in the 50th minute, Cardiff getting over the gain-line and releasing big winger Lane for the left corner despite Cian Prendergast’s despairing tackle.

Williams swept over a fine conversion, opening up an eight-point advantage, and Carty was just as accurate a few minutes later, pinging over a penalty with debutant Hansen beginning to get on the ball more.

Cardiff continued to have the lion’s share of possession, Jason Harries just knocking on as he attempted to score from his own kick through.

The game appeared to turn in Connacht’s favour when Cardiff lock Seb Davies saw yellow for not rolling away, amid a series of penalties. Frustratingly, the westerners’ lineout let them down when a try was in the offing. 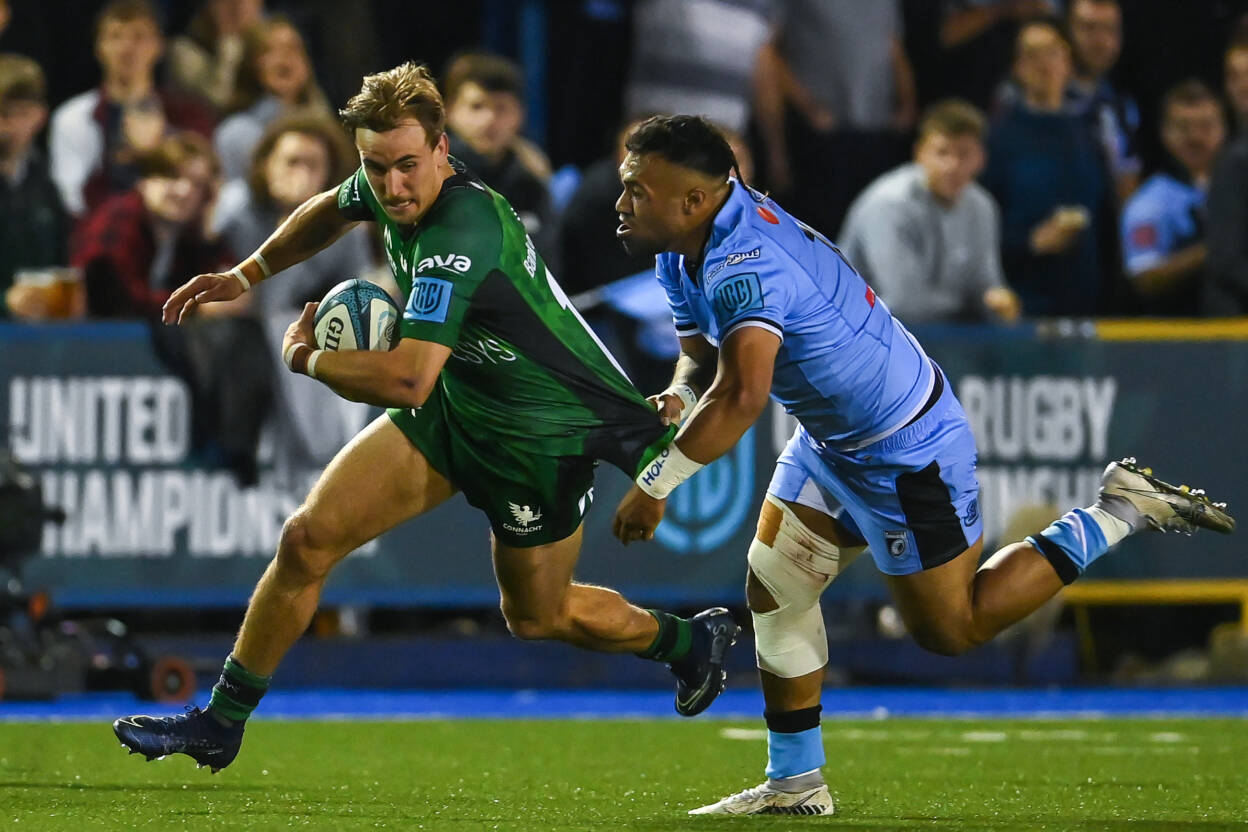 It went from bad to worse shortly afterwards, as Carty dived in at a ruck and earned a yellow. Then, in the 69th minute, Lane was illegally impeded by Hansen as he chased his own kick and Connacht were down to 13 men.

The hosts needed no second invitation, Williams sending Lane over off the side of a maul. With their bonus point secured, Cardiff added a fifth try when Belcher burst through from another lineout drive.

Connacht’s only consolation was a spritely last-minute surge, Stephen Fitzgerald arrowing through a gap from first-phase. Fellow replacement Sam Arnold was tackled short but released Marmion to reach over to the left of the posts.

Versatile Wales and Ospreys back George North hopes to return from a serious knee injury during the festive period this season.
The Springboks have defended their style of play and form ahead of tonight's historic test against the All Blacks, saying they are not bothered by criticism from former international players and coaches.South Africa will face New...
The 2021 Las Vegas Rugby Cup match between the USA and Ireland, scheduled for 30 October at Allegiant Stadium, has been cancelled.

The Welsh Rugby Union has teamed up with the Calon Hearts charity to ensure life-saving defibrillators will be installed at every club in Wales, free of charge this season. With more than 300 clubs throughout the country hosting rugby from senior men and women at clubs and hubs to a wide range of junior teams […]

The post Life-saving defibs to be installed at ALL clubs appeared first on Welsh Rugby Union | Wales & Regions.

Head coach Bryan Easson says the exposure of reaching the 2022 Rugby World Cup would push women's rugby in Scotland to "the next level".
Team news as London Irish host Sale in Sunday's Premiership fixture at the Brentford Community Stadium (15:00 BST).
Ahead of its opening weekend, United Rugby Championship chief executive Martin Anayi says there are few competitions that can celebrate such a diversity of playing cultures.

The 2021 Las Vegas Rugby Cup between the USA and Ireland scheduled for Saturday October 30th at Allegiant Stadium, Las Vegas has been cancelled with focus now on rescheduling to October 2022.

The continued border restrictions on entry into the United States from Ireland and the UK have presented insurmountable logistical challenges for the Irish team to fulfil the fixture.

The vision for the 2021 Las Vegas Rugby Cup is for Irish and international rugby fans to descend on Las Vegas and create a global showcase for international rugby. That is not possible in October with border restrictions between Ireland, the UK and USA remaining in place until 1 November 2021. 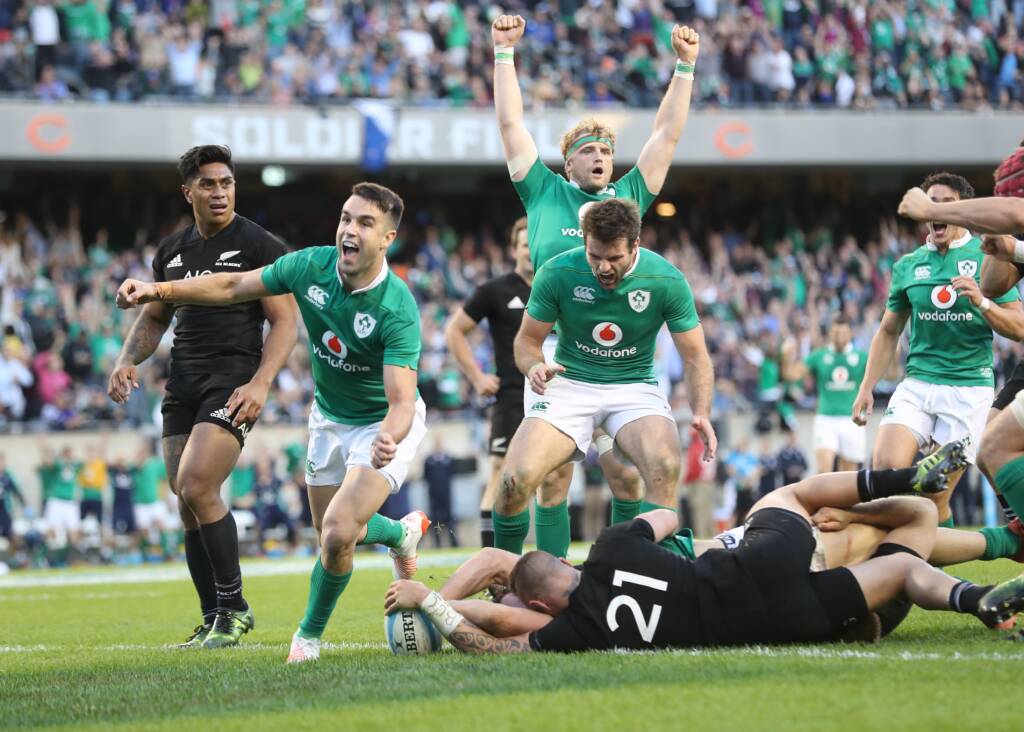 Philip Browne, IRFU CEO, commented, “It’s regrettable that the game won’t be going ahead this October. From an IRFU point of view, the match presented the Irish team with another valuable Test match and the opportunity to experience the atmosphere at the impressive Allegiant Stadium.

I am sure Irish supporters were excited at the prospect of seeing the team play in Las Vegas. Irish Rugby is committed to enhancing its connection with the Irish Diaspora in the US and has played memorable fixtures in Chicago and New Jersey in recent seasons as we further expand the Irish Rugby brand globally. We are very supportive at looking at rescheduling the fixture next year.”

“We’re obviously extremely disappointed to hear this match is unable to take place as scheduled in 2021,” said USA Rugby CEO Ross Young, “Learning about the impact of ever-changing travel restrictions was devastating, but unfortunately an all-too-common consequence for international sport over the past year and a half. Knowing that our Men’s Eagles will still have the chance to host Ireland in a venue like Allegiant Stadium next year is encouraging and we look forward to seeing that event being confirmed and ultimately delivered as a bigger and better experience for everyone.”

Any fans who have purchased tickets will be offered a refund and are asked to contact their respective ticket purchase platform to secure a refund in accordance with the terms and conditions of the tickets purchased.